This was a simple project that had been on my to-do list for a long time. I had started it several years ago and it just never got finished. It is a simple project that just sounds off an alaram if the fuel pressure in a 2001 Dodge RAM gets too low. The 2nd generation Dodge RAM trucks with the Cummins 5.9 diesel engine had a flaw in the fuel system. The trucks have 2 fuel pumps. The lift pump gets the fuel out of the tank and to the engine. The $2000 injector pump located at the engine is lubricated by the fuel. This works great until there is no fuel to lubricate it. So a $100 lift pump failure can cause over $2000 in damage. An aftermarket fuel pressure gauge has been installed on my truck. Unless you drive with one eye on the road and the other on the gauge 100% of the time, it is still possible to have a failure and not know about it until it is too late.

This project will solve the problem once and for all by sounding an alarm if the pressure gets below 5PSI at the lift pump. A fuel pressure sensor switch was installed in the fuel line. The switch is normally open. When it has 5PSI of fuel it is closed. The alarm is just a simple circuit built around an ATTiny85. When a pin on the switch goes high, it sounds off an alarm. The entire circuit board is enclosed in a 3D printed case, which can be obtained from here on thingiverse. The 3D printed case holds a popular PCB that was originally made by Radio Shack and can be used for other projects. 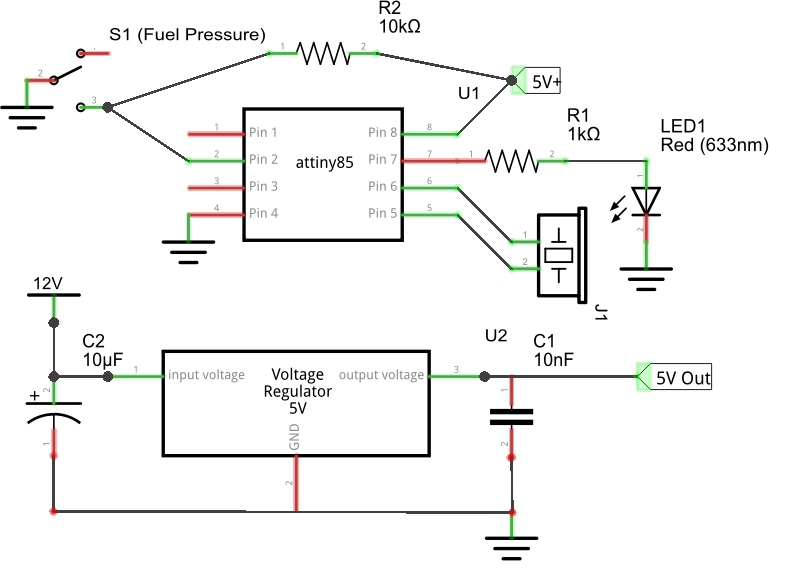 Here is a list of things you will need to build this project: